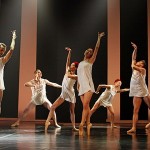 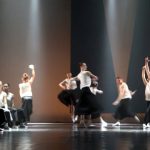 The idea of this project belongs to modern classic, composer Vladimir Martynov. He is a composer, thinker, writer, historian, expert in ancient and modern music. It is thanks to Leonid Desyatnikov and Vladimir Martynov people sometimes realise that nowadays serious academic music still exists. Martynov is known by his co-work with Jury Liubimov and Anatoly Vasiliev who staged his Jeremiah’s Lamentations and Mozart and Salieri.

Vladimir Martynov finished his work on 4 Seasons not so long ago. This piece is based on the Antonio Vivaldi’s same-name concerts , Bach’s prelude, Mendelson’s overture and Pärt’s canun. In Martynov’s score is referred not to the change of seasons, but to the change of periods in concert composer music history. Moreover, every season is performed by a concrete composer. Vivaldi is spring, Bach – summer, Mendelson – autumn, Pärt – winter.  So,  the performance resembles a play different styles and techniques and also reflects culturological concept of Martynov. This concept is presented in the book The End of the Time of Composers.

4 Seasons is the project where music is live. A wonderful Tatyana Grindenko and ensemble Opus Posth are responsible for this. Ensemble’s creative work is based on Martynov’s conception , which explains both the title of the performance and modern cultural situation. Opus Posth musicians try to create new musical history and new musician space. Ensemble’s stylistic unites different traditions of performing: authentic, avant-garde, archaic folklore.

Opus Posth changes traditional relationships between artist and public. That’s why musicians bring rituality of consecrated music to non-ritual space of secular concert. As a result new cooperation is born between stage and audience. Spectators are not just consumers and observers. They transform into participants of ritual act. Musicians appearance contributes to this process significantly. They play in special costumes and masks. And this brings musical process to transpersonal level. Opus Posth musicians exceed the limits of pure music, brings theatre, painting and poetic elements to their ideas.